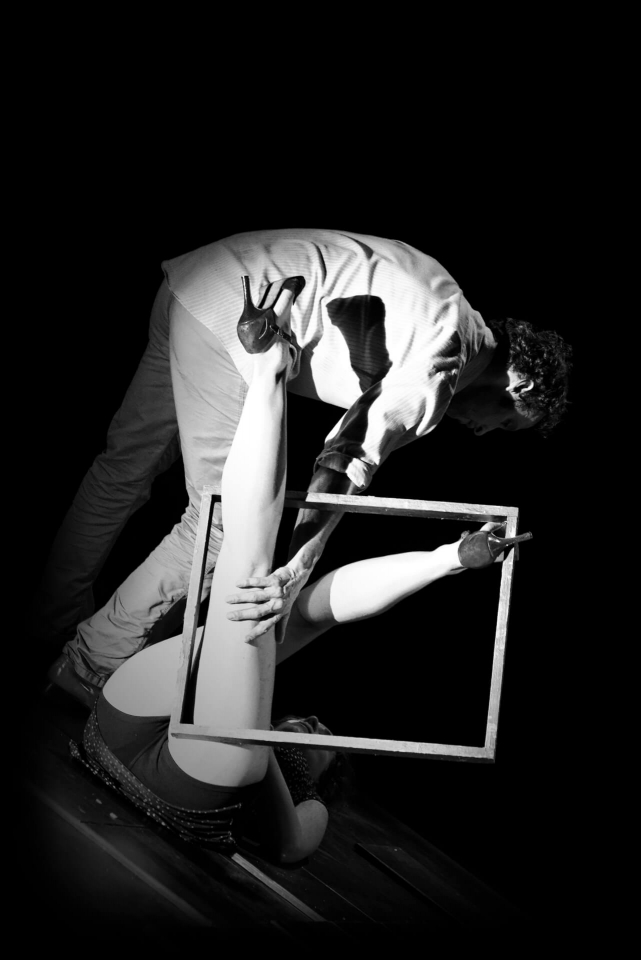 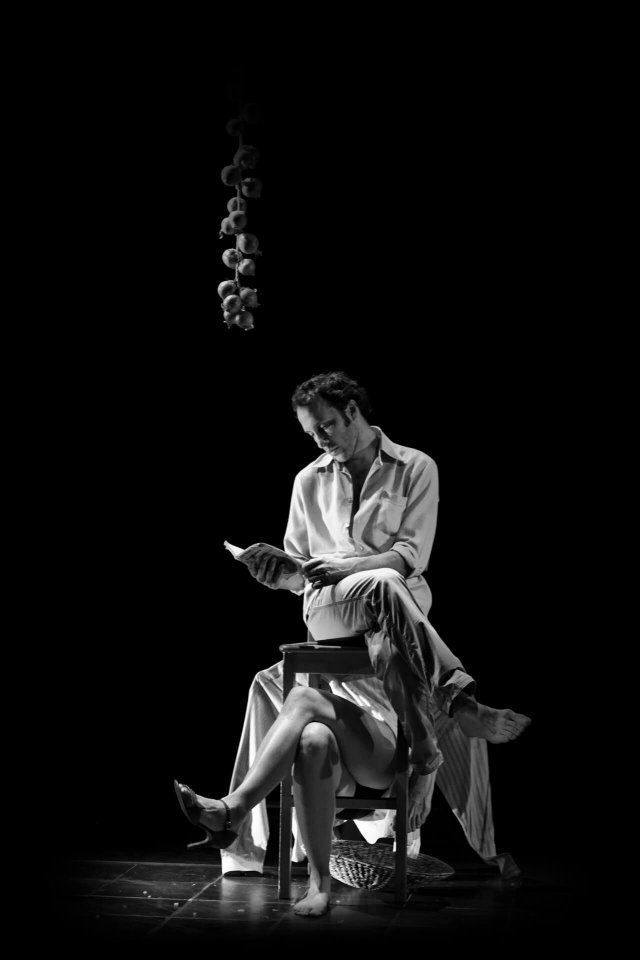 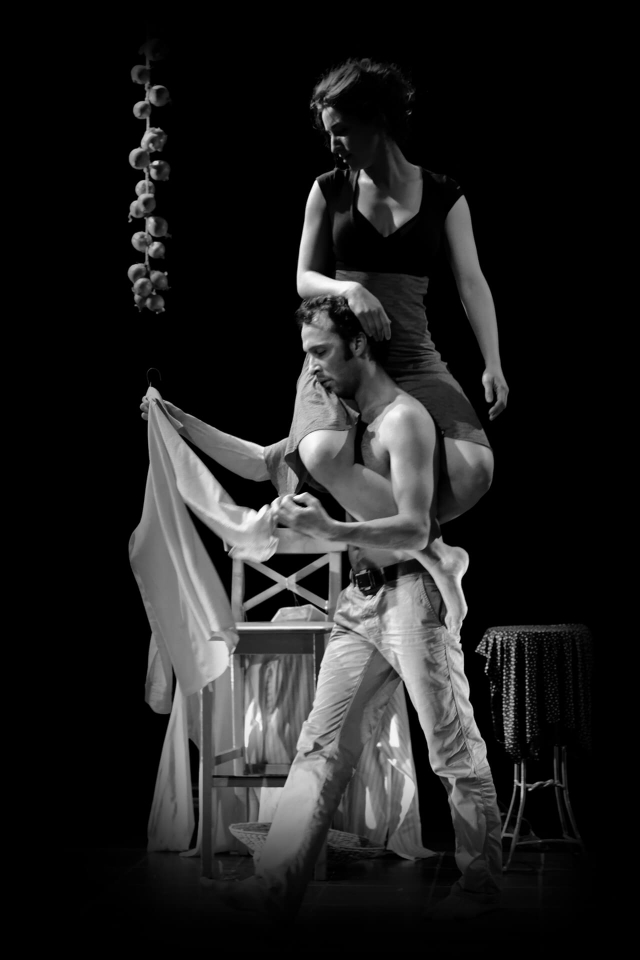 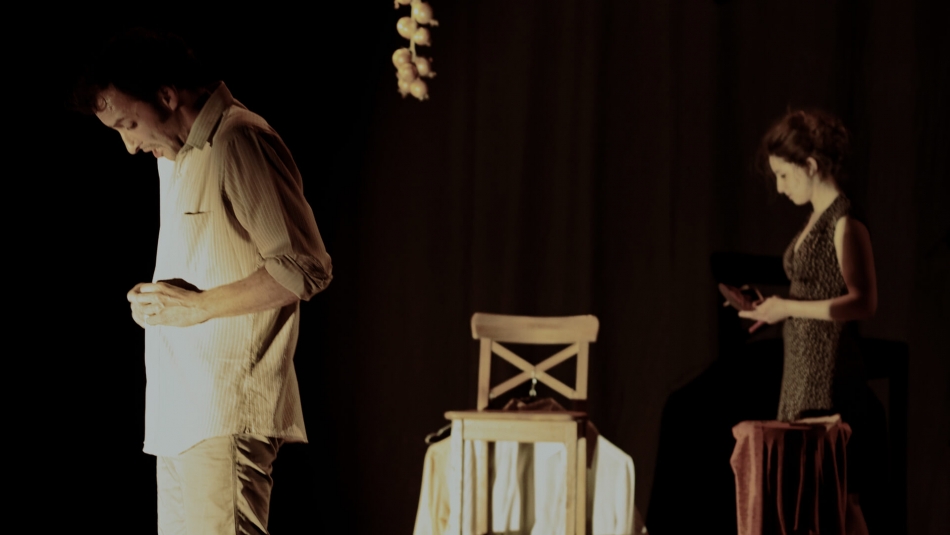 Within the four walls of his small apartment,
Alfredo is alone and yet someone else is there.
« That is the mystery, the solution lies in it. »

Caught in the middle of a play with words, body movements, ellipses and clues,the absent and yet omnipresent Joséphina, occupies the space…
What happened three months ago?
As the physical sequences evolve, words and action never giving it away, fragments of life and intimacy are revealed.
What clues should you follow? What should you believe?
Movements and sounds intertwine, desperately trying to solve the mystery…

In this piece, a man and a woman cross paths. From flashbacks to disturbing dreams, from scattered memories to obsessive desire, the spectator is free to piece together the puzzle of a dreamed relationship, or of a relationship that no longer exists, the story of a shattered or idealised couple. Between reality and fantasy the body and the word come together in a very intimate fashion, allowing poetic shifts and entanglements, comical changes in direction and a strong visual impact of the physical metamorphosis. The spoken words and the physical movements divert and transform each other. Through this dialogue between the body and the spoken word, the visual force of the written text is expressed both physically and poetically through the body of the mime actor.
Does adding verbal expression to the mime art mean that we remove that which specifically defines it? This question was used as a starting point in the creative process of Joséphina. The second original creation by the Chaliwaté Company, the show is for all audiences and offers a subtle combination of verbal expression and body movement. Using every-day-life situations as well as surrealistic situations, but also illustration and abstraction, the piece drifts from one form to another in such a way which allows the artist to experiment the different facets of the human body as an artistic tool, combining it with texts written by modern authors such as Xavier Durringer, Gao Xingjian and Henri Michaux.

Gestural theatre – For all audiences

”After an hour of the relentless struggle of two bodies clashing, of raw onions thrown in your face, of swaying tussle, Sandrine Heyraud and Sicaire Durieux tell a story about the absence of a loved one, the emptiness she left behind, the consequences of a crime of passion. The performance revives our desire for love, the will to bite into it with incisors rather than with soft milk teeth. With Joséphina, we understand more clearly why one “falls” in love, and all the delicious agony that comes with the fall. (…) Impossible not to fall for it! (…) We leave the theatre with an invigorated imagination and the wish to experience love as a passionate dance.” Catherine Makereel, Le Soir 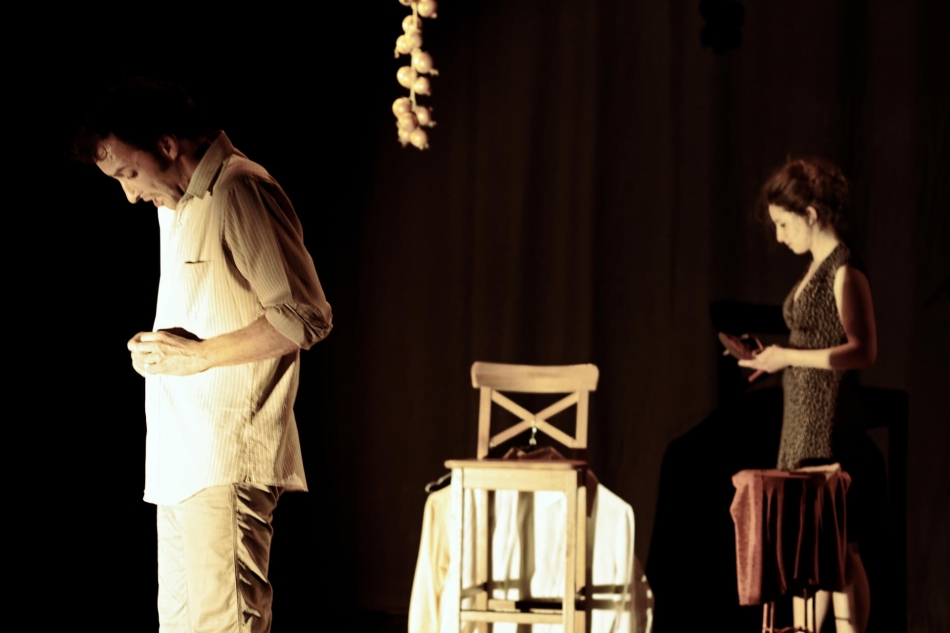 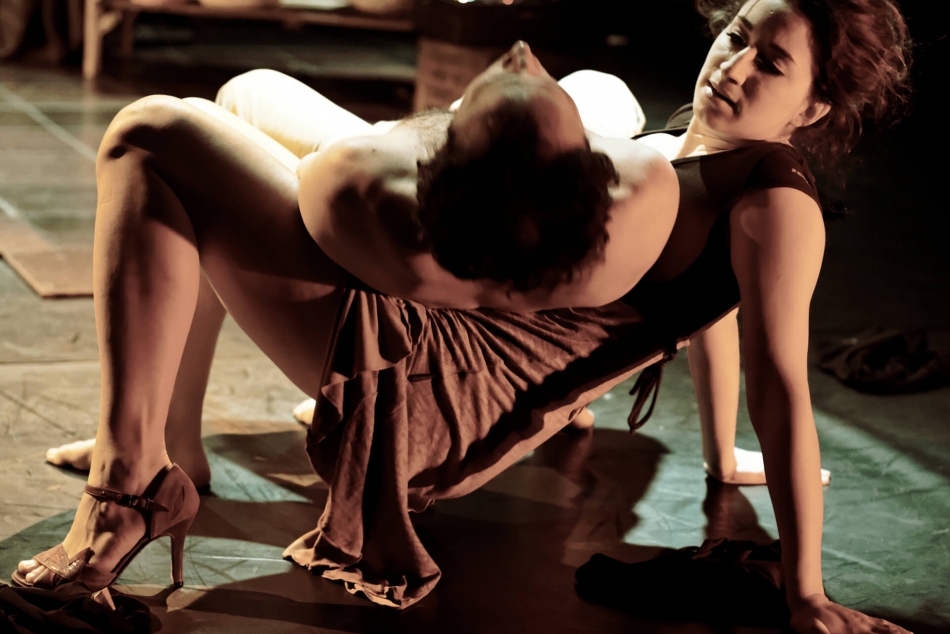